It was in the year 1955, the St. Peter’s College Library was organized by Miss Guadalupe Fidel, the first librarian. During this stage, there were only one librarian and one student assistant to cater the estimated 652 students elementary (88), High School (420), and college (144) students. It adapted was a closed-shelves system of servicing it circulation section, and was located at the second floor at the Punongbayan building. An estimated initial collection of about 1,500 volumes consisted of general and basic reference for elementary,high school, and college. Periodicals and newspapers were few.

In 1985,the library was transferred to Administration building and occupied the whole third floor, which can accomodated at least 300 students per sitting. There was an increase of book collection, ranging from 1,500 to 16,000 volumes. Titles of periodicals and newspapers also increased.

In 1990, the St. Peter’s College Library acquired the Laser Library with CD-ROMs, and it opened its gates to computerization and to worldwide web, which has been already servicing to date. 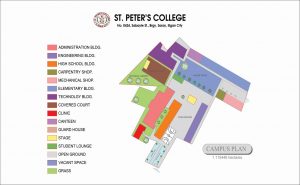 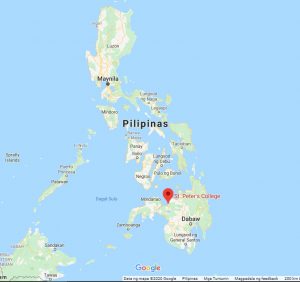